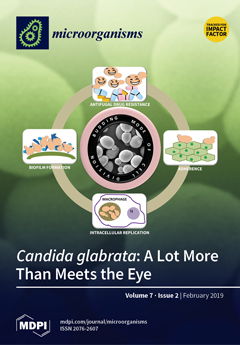 Cover Story (view full-size image): Candida glabrata is an opportunistic human fungal pathogen that is capable of causing both superficial mucosal and life-threatening bloodstream infections in immunocompromised individuals. In this article, we provide an overview of its pathogenesis traits, nutrient acquisition pathways, and host interaction mechanisms. The ability of C. glabrata to adhere to host cells, form biofilms on biotic and abiotic surfaces, replicate in macrophages, and survive diverse stresses including antifungal drugs contributes to its success as a nosocomial pathogen. View this paper.
Previous Issue
Volume 7, January
Next Issue
Volume 7, March
We use cookies on our website to ensure you get the best experience. Read more about our cookies here.
Accept
We have just recently launched a new version of our website. Help us to further improve by taking part in this short 5 minute survey here. here.
Never show this again