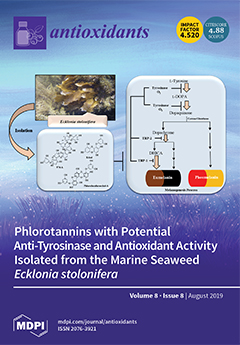 Cover Story (view full-size image): Ecklonia stolonifera Okamura is a marine brown alga rich in phlorotannins widely consumed as food. The phlorotannin 974-A, isolated from E. stolonifera, was demonstrated for the first time to be a potent competitive inhibitor of mushroom tyrosinase activity towards L-tyrosine and L-DOPA (IC50 values = 1.57 ± 0.08 and 3.56 ± 0.22 μM, respectively). 974-A, phlorofucofuroeckol-A, and eckol reduced the cellular melanin content and tyrosinase activity, downregulated the expression of melanogenesis enzymes including tyrosinase, tyrosinase-related protein (TRP)-1, and TRP-2 in B16F10 melanoma cells, and effectively scavenged radicals at the cellular level. Hence, phlorotannins isolated from E. stolonifera are potent tyrosinase inhibitors having potential for treatment of hyperpigmentation and for exploitation of their anti-browning effects in the agricultural field. View this paper.
Previous Issue
Volume 8, July
Next Issue
Volume 8, September
We use cookies on our website to ensure you get the best experience. Read more about our cookies here.
Accept
We have just recently launched a new version of our website. Help us to further improve by taking part in this short 5 minute survey here. here.
Never show this again