Submit to Life Review for Life 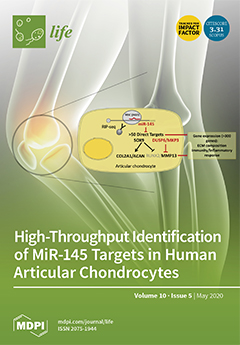 Cover Story (view full-size image): Human articular chondrocytes (HACs) synthetize the extracellular matrix (ECM) that confer cartilage its biomechanical properties. HACs failure to produce a balanced ECM leads to osteoarthritis and inflammation worsen the disease. We have shown that miRNA miR-145 silences transcription factor Sox9 resulting in lower and higher levels, respectively, of the main ECM component Col2a1 and the catabolic protease MMP13. Here, by immunoprecipitating the miRNA-induced silencing complex (RISC) in HACs overexpressing miR-145, we identify more than 50 miR-145 new direct targets. One of these targets, DUSP6, contributes to MMP13 repression. Overexpression of miR-145 results in altered expression of hundreds of genes involved in ECM remodelling and immunity and inflammation. Thus, we propose miR-145 inhibition as a potential approach for cartilage repair. View this paper
Previous Issue
Volume 10, April
Next Issue
Volume 10, June
We use cookies on our website to ensure you get the best experience. Read more about our cookies here.
Accept
We have just recently launched a new version of our website. Help us to further improve by taking part in this short 5 minute survey here. here.
Never show this again