A New Record for Microbial Perchlorate Tolerance: Fungal Growth in NaClO4 Brines and its Implications for Putative Life on Mars
Previous Article in Journal

Two widely-cited alternative hypotheses propose geological localities and biochemical mechanisms for life’s origins. The first states that chemical energy available in submarine hydrothermal vents supported the formation of organic compounds and initiated primitive metabolic pathways which became incorporated in the earliest cells; the second proposes that protocells self-assembled from exogenous and geothermally-delivered monomers in freshwater hot springs. These alternative hypotheses are relevant to the fossil record of early life on Earth, and can be factored into the search for life elsewhere in the Solar System. This review summarizes the evidence supporting and challenging these hypotheses, and considers their implications for the search for life on various habitable worlds. It will discuss the relative probability that life could have emerged in environments on early Mars, on the icy moons of Jupiter and Saturn, and also the degree to which prebiotic chemistry could have advanced on Titan. These environments will be compared to ancient and modern terrestrial analogs to assess their habitability and biopreservation potential. Origins of life approaches can guide the biosignature detection strategies of the next generation of planetary science missions, which could in turn advance one or both of the leading alternative abiogenesis hypotheses. View Full-Text
Keywords: origins of life; hydrothermal systems; planetary science; Mars; Europa; Titan; exoplanets; biosignatures; astrobiology; biopreservation origins of life; hydrothermal systems; planetary science; Mars; Europa; Titan; exoplanets; biosignatures; astrobiology; biopreservation
►▼ Show Figures 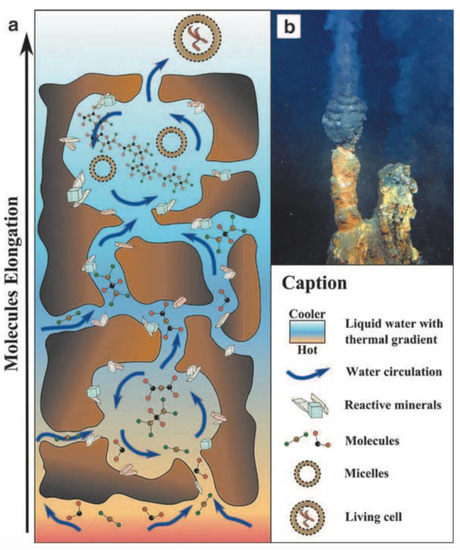