The Nitrogen Stress-Repressed sRNA NsrR1 Regulates Expression of all1871, a Gene Required for Diazotrophic Growth in Nostoc sp. PCC 7120
Next Article in Special Issue

A New Record for Microbial Perchlorate Tolerance: Fungal Growth in NaClO4 Brines and its Implications for Putative Life on Mars

The habitability of Mars is strongly dependent on the availability of liquid water, which is essential for life as we know it. One of the few places where liquid water might be found on Mars is in liquid perchlorate brines that could form via deliquescence. As these concentrated perchlorate salt solutions do not occur on Earth as natural environments, it is necessary to investigate in lab experiments the potential of these brines to serve as a microbial habitat. Here, we report on the sodium perchlorate (NaClO4) tolerances for the halotolerant yeast Debaryomyces hansenii and the filamentous fungus Purpureocillium lilacinum. Microbial growth was determined visually, microscopically and via counting colony forming units (CFU). With the observed growth of D. hansenii in liquid growth medium containing 2.4 M NaClO4, we found by far the highest microbial perchlorate tolerance reported to date, more than twice as high as the record reported prior (for the bacterium Planococcus halocryophilus). It is plausible to assume that putative Martian microbes could adapt to even higher perchlorate concentrations due to their long exposure to these environments occurring naturally on Mars, which also increases the likelihood of microbial life thriving in the Martian brines. View Full-Text
Keywords: Mars; habitability; brines; salts; perchlorate; microorganisms; halotolerant; fungi; yeast; microbial growth Mars; habitability; brines; salts; perchlorate; microorganisms; halotolerant; fungi; yeast; microbial growth
►▼ Show Figures 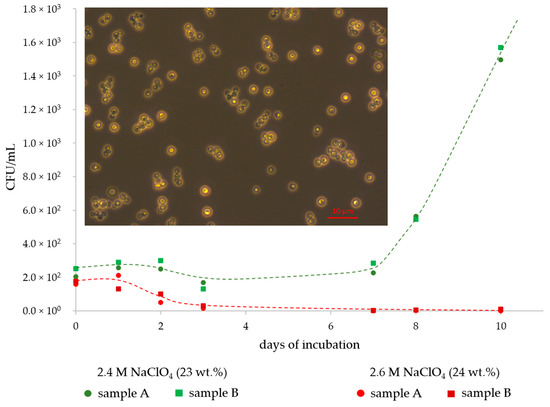