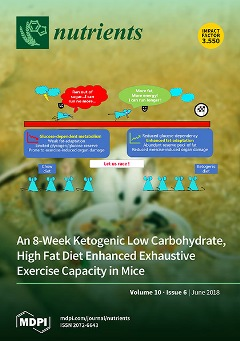 Cover Story (view full-size image): A low carbohydrate, high fat ketogenic diet (KD) is a nutritional approach ensuring that the body utilizes lipids. To evaluate the effects of KD on endurance exercise capacity, we studied the performance of mice subjected to a running model after consuming KD for eight weeks. Weight dropped dramatically in KD-feeding mice, even though they ate more calories. KD-feeding mice showed enhanced running time without aggravated muscle injury. Blood biochemistry and correlation analysis indicated the potential mechanism is likely to be a keto-adaptation enhanced capacity to transport and metabolize fat. KD also showed a potential preventive effect on organ injury caused by acute exercise, although KD failed to exert protection from muscle injury. Ultimately, KD may contribute to prolonged exercise capacity. View this paper
Previous Issue
Volume 10, May
Next Issue
Volume 10, July
We use cookies on our website to ensure you get the best experience. Read more about our cookies here.
Accept
We have just recently launched a new version of our website. Help us to further improve by taking part in this short 5 minute survey here. here.
Never show this again