Dietary Cholesterol, Lipid Levels, and Cardiovascular Risk among Adults with Diabetes or Impaired Fasting Glucose in the Framingham Offspring Study

An estimated 30.3 million people in the U.S (9.4% of the population) have type 1 or type 2 diabetes which are known to be associated with a number of cardiovascular disease (CVD) risk factors and other complications [1]. An additional 33.9% of adults aged 18 years or older have prediabetes, a finding that is also associated with increased CVD risk [1,2]. Identification of modifiable factors for CVD among this group of high-risk adults is a high priority.
Early Dietary Guidelines for Americans for many years recommended limiting dietary cholesterol intake to no more than 300 mg per day [3]. However, a number of longitudinal studies and interventional trials failed to support the earlier presumed association between dietary cholesterol and CVD [4,5,6]. As a result, the report from the US Department of Agriculture (USDA)’s 2015 Dietary Guidelines for Americans stated that “cholesterol is no longer considered a nutrient of concern for overconsumption” among healthy adults [7]. In fact, some studies have shown that higher dietary cholesterol intake is associated with beneficial changes in lipid profiles including increased numbers of large low-density lipoprotein (LDL) and high-density lipoprotein (HDL) particles, decreased numbers of small dense LDL particles, and no adverse association with the LDL/HDL ratio [8,9,10,11,12,13].
Questions remain about the relation between dietary cholesterol intake and CVD risk among individuals with diabetes and pre-diabetes. Several epidemiology studies, including two systemic reviews and a meta-analysis, found that higher egg intake (as a marker of dietary cholesterol) was associated with increased CVD risk amongst people with diabetes [14,15], while other studies have not shown such an association [16]. Some analyses examining the effects of higher intakes of overall dietary cholesterol have suggested an association with increased CVD risk among adults with prevalent diabetes [17], although this evidence is far from conclusive.
For the following analyses, we used data from the prospective Framingham Offspring Study (FOS) to examine the association between dietary cholesterol and change in lipid levels over time as well as the risk of incident CVD among individuals with prevalent diabetes.

This study used data from the Framingham Offspring Study (FOS). Details of this study have been previously described [18]. Enrollment began in 1972 with 5124 participants who were offspring (and spouses) of the original Framingham Heart Study subjects. Data related to physical/medical status, laboratory values, and lifestyle factors were collected at exam visits that occurred at approximately four-year intervals.
For the current prospective analyses, we have included participants at exam visits 3, 4, or 5 (when dietary data were available), starting with at the first exam visit at which they were 35–<65 years of age (n = 4064). We excluded 300 subjects who had extremes of dietary intake, defined as follows: (1) average daily energy intake <1200 or >4000 kilocalories in men, or <1000 or >3500 kilocalories in women; (2) average daily percent of energy from alcohol >20%; (3) average weekly intake of >56 ounce-equivalents of meat, or >56 ounce-equivalents of poultry, or >56 ounce-equivalents of fish (but not total meat, poultry, and fish); (4) >35 eggs per week; or (5) >100 ounce-equivalents of soy, nuts, seeds, and legumes. We also excluded 1006 who did not provide food diaries and 1403 who had no prevalent impaired fasting glucose (IFG) or Type 2 diabetes mellitus (T2DM) at or before exam visit 5, as well as 204 with missing lipid data, and 68 with missing data on confounding variables of interest. This yielded a final analytic sample of 993 subjects with prevalent T2DM or impaired fasting glucose for the analyses examining dietary cholesterol intake and lipid levels through exam visit 8. Finally, 82 subjects with prevalent CVD at baseline were excluded for the analyses related to dietary cholesterol and risk of incident CVD.
At each exam visit, participants were asked to provide a blood sample after ten or more hours of fasting. Subjects were considered to have T2DM if they reported using hypoglycemic medication or had blood glucose levels of 200 mg/dL or higher regardless of fasting status. Subjects with glucose levels of 126–199 mg/dL were also classified as having T2DM if they met one of the following criteria: (1) fasted for 10 h or more; (2) had a history of diabetes; or (3) were diagnosed with T2DM at the following exam without having gained 7% or more of body weight between exams. Classification of IFG at exams 1 and 2 was complicated due to uncertain fasting time; subjects not meeting the criteria for T2DM but who had a fasting glucose level ≥126 mg/dL at either of the first two exams was considered to have IFG. At all subsequent exams, subjects who fasted for 10 or more hours were considered to have IFG when their fasting glucose levels were between 100–125 mg/dL.

Three-day diet records were collected at exam visit 3 (starting in 1984) and exam visit 5. Approximately 70% of participants completed diet records, which were then entered into the Nutrition Data System (NDS), a nutrient calculation program developed at the University of Minnesota, to calculate their daily intake of nutrients (i.e., energy, macronutrients, vitamins, and minerals). The usual intake of dietary cholesterol was estimated as the mean intake from up to six days of diet records.

Serum lipids explored in these analyses included LDL-cholesterol, HDL-cholesterol, the LDL:HDL ratio, and triglycerides. Fasting measures were taken at 4-year intervals from the baseline exam for these analyses (beginning at the time of dietary assessment) to the end of follow up. Standard lipid assessment methods were used as has been previously described [19].
CVD events in these analyses included fatal and non-fatal myocardial infarction, incident coronary heart disease diagnosis, and stroke. Incident CVD was determined by calculating person-years of follow up from the time of the final dietary cholesterol measurement to the first of the following events: occurrence of a CVD event, loss to follow up, date of death, or date of last exam (exam visit 8).

Height and weight were measured at each exam visit. For the calculation of BMI (weight (kg)/[height (m)]2) at each exam visit, the exam-specific weight was divided by average adult height (with height censored at age 60 to eliminate effects of height loss). For example, height measurements for a 64-year-old subject at baseline (exam visit 3) were derived from measures at exam visits 1 and 2. Waist circumference was measured at exam visit 4. Physical activity was measured by questionnaire and a physical activity index was calculated as a weighted average of total hours of moderate and vigorous activity per day at exam visits 2 and 4. Smoking was assessed as the number of cigarettes smoked per day among current smokers and total pack-years of smoking was estimated by multiplying amount smoked by the number of years of smoking. Alcohol intake was also assessed at each exam visit by questionnaire. The potential confounders explored in these analyses included age, sex, BMI, waist circumference, education level, physical activity, smoking (cigarettes per day and total pack-years of smoking), energy intake, percentage of energy from carbohydrates, total fat, saturated fat and total protein, use of lipid-lowering medication, and alcohol intake. Only those factors that confounded the estimates by approximately 10% or more were included in the final models: age, pack-years of smoking, waist circumference, percentage of energy from carbohydrates and saturated fat, and use of lipid-lowering medication.

This analysis of prospective data identified no adverse association between dietary cholesterol and serum lipid levels or CVD risk amongst those with impaired fasting glucose or Type 2 diabetes.

The following are available online at https://www.mdpi.com/2072-6643/10/6/770/s1, Table S1 Evaluating the intermediate effects of lipids on CVD risk among Framingham Offspring adults with Impaired Fasting Glucose or Type 2 Diabetes.

This work was supported by the National Heart, Lung and Blood Institute’s Framingham Heart Study (Contract No. N01-HC-25195) and the Multidisciplinary Training Program in Cardiovascular Epidemiology (NIH 1T32HL125232) as well as the American Egg Board/Egg Nutrition Center. 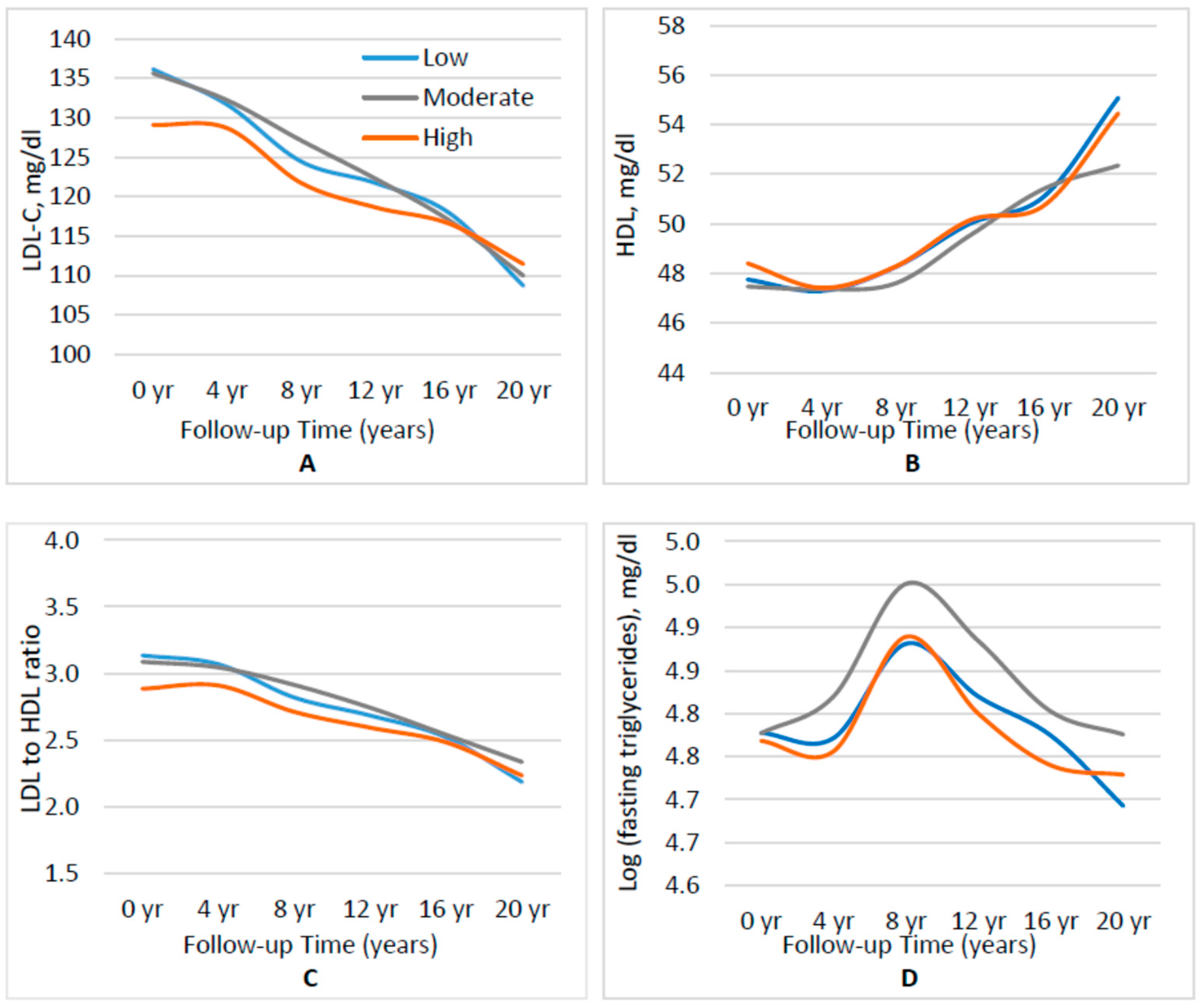 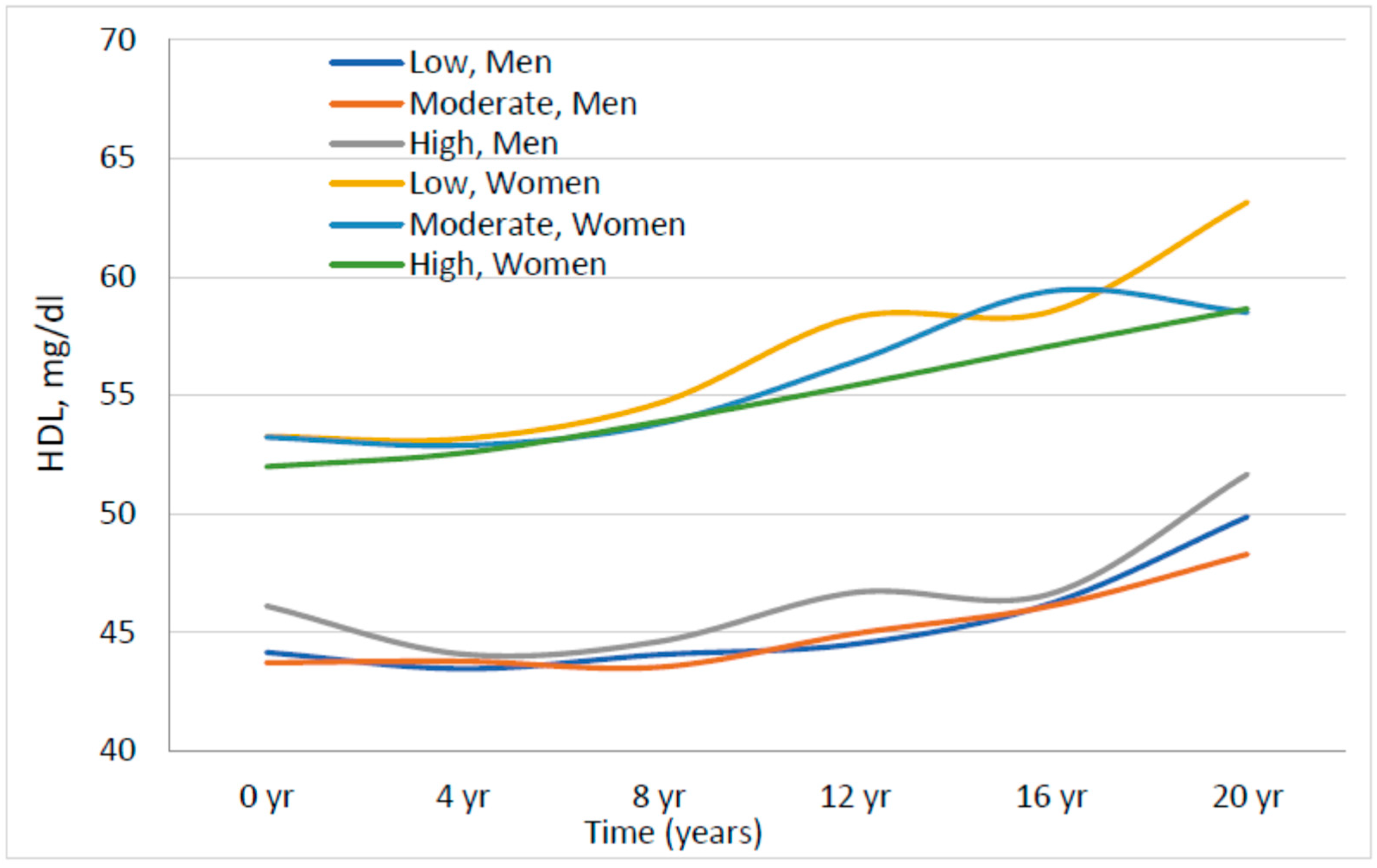