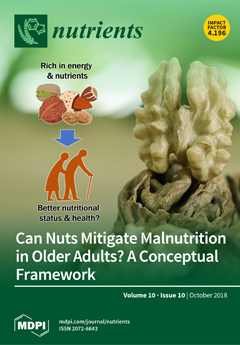 Cover Story (view full-size image): The number of older adults in the world is growing rapidly and ageing is associated with several nutritional and health concerns, including malnutrition that affects 26.5% of community-dwelling older adults. Despite their high energy and nutrient density, nuts are not widely used in preventing and reversing malnutrition. This review summarises some opportunities and challenges of using nuts in improving the dietary intake and nutritional status of older adults. Following that, we propose a few strategies that overcome these challenges and maximise the benefits of nuts in this population. We conclude by recommending a number of future research directions in this area. View this paper
Previous Issue
Volume 10, September
Next Issue
Volume 10, November
We use cookies on our website to ensure you get the best experience. Read more about our cookies here.
Accept
We have just recently launched a new version of our website. Help us to further improve by taking part in this short 5 minute survey here. here.
Never show this again