Submit to Plants Review for Plants 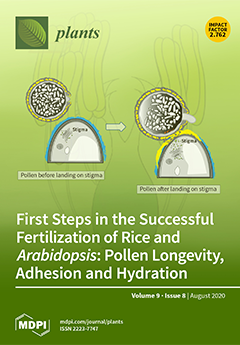 Cover Story (view full-size image): Understanding the behavior of pollen during pollination is important for future food security. Rice has desiccation-sensitive pollen and relatively high water content at shedding. The short longevity of rice pollen significantly hampers hybrid seed production. Although “omics” data for mature rice pollen have been accumulated, few of the genes that control pollination and pollen hydration have been identified. Therefore, to facilitate future studies, it is necessary to summarize pollen biology during pollination and to understand the underlying mechanisms discovered in previous studies. In this review, we compared the pollen hydration processes of rice and Arabidopsis and introduce their gametophytic mutants. View this paper
Previous Issue
Volume 9, July
Next Issue
Volume 9, September
We use cookies on our website to ensure you get the best experience. Read more about our cookies here.
Accept
We have just recently launched a new version of our website. Help us to further improve by taking part in this short 5 minute survey here. here.
Never show this again