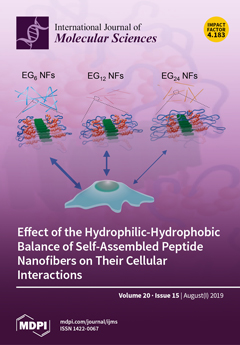 Cover Story (view full-size image): In this report, three different nanofibers (NFs) were prepared by self-assembly of β-sheet-forming peptides, conjugated with model antigenic peptides and hydrophilic oligo-ethylene glycol (EG) of differing chain lengths (6-, 12- and 24-mer), to investigate the effect of EG length of antigen-loaded NFs on their cellular uptake, cytotoxicity, and dendritic cell-stimulation ability. The results obtained show that the interaction between antigen-loaded NFs and cells can be tuned by the EG length, which provides useful design guidelines for the development of effective NF-based vaccines. View this paper.
Previous Issue
Volume 20, July-2
Next Issue
Volume 20, August-2
We use cookies on our website to ensure you get the best experience. Read more about our cookies here.
Accept
We have just recently launched a new version of our website. Help us to further improve by taking part in this short 5 minute survey here. here.
Never show this again