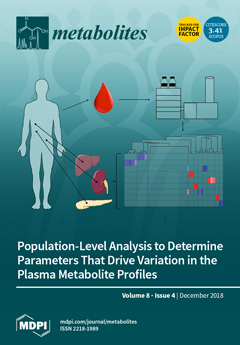 Cover Story (view full-size image): The human plasma metabolome contains vast amounts of information on the health status of the individual. However, the factors that impact the variation in the human metabolome remain poorly characterized. In this paper, plasma metabolite profiles were associated with a range of clinical parameters in an extensively phenotyped cross-sectional population. The results revealed clear metabolic signatures related to, for example, liver and kidney function, as well as insulin resistance. Moreover, several metabolite factors were associated with the same phenotypic trait, indicating independent mechanisms. Since the results in this paper reflected findings from studies on severe clinical conditions, they may indicate early signs of disease in a largely healthy population. View this paper.
Previous Issue
Volume 8, September
Next Issue
Volume 9, January
We use cookies on our website to ensure you get the best experience. Read more about our cookies here.
Accept
We have just recently launched a new version of our website. Help us to further improve by taking part in this short 5 minute survey here. here.
Never show this again