No Country for Old Worms: A Systematic Review of the Application of C. elegans to Investigate a Bacterial Source of Environmental Neurotoxicity in Parkinson’s Disease

1
Department of Biological Sciences, The University of Alabama, Box 870344, Tuscaloosa, AL 35487, USA
2
Departments of Neurology and Neurobiology, Center for Neurodegeneration and Experimental Therapeutics, Nathan Shock Center for Research on the Basic Biology of Aging, University of Alabama at Birmingham School of Medicine, Birmingham, AL 35294, USA
*
Author to whom correspondence should be addressed.
Metabolites 2018, 8(4), 70; https://doi.org/10.3390/metabo8040070
Received: 7 October 2018 / Revised: 21 October 2018 / Accepted: 26 October 2018 / Published: 29 October 2018
(This article belongs to the Special Issue Metabolomics in Neurodegenerative Disease)

While progress has been made in discerning genetic associations with Parkinson’s disease (PD), identifying elusive environmental contributors necessitates the application of unconventional hypotheses and experimental strategies. Here, we provide an overview of studies that we conducted on a neurotoxic metabolite produced by a species of common soil bacteria, Streptomyces venezuelae (S. ven), indicating that the toxicity displayed by this bacterium causes stress in diverse cellular mechanisms, such as the ubiquitin proteasome system and mitochondrial homeostasis. This dysfunction eventually leads to age and dose-dependent neurodegeneration in the nematode Caenorhabditis elegans. Notably, dopaminergic neurons have heightened susceptibility, but all of the neuronal classes eventually degenerate following exposure. Toxicity further extends to human SH-SY5Y cells, which also degenerate following exposure. Additionally, the neurons of nematodes expressing heterologous aggregation-prone proteins display enhanced metabolite vulnerability. These mechanistic analyses collectively reveal a unique metabolomic fingerprint for this bacterially-derived neurotoxin. In considering that epidemiological distinctions in locales influence the incidence of PD, we surveyed soils from diverse regions of Alabama, and found that exposure to ~30% of isolated Streptomyces species caused worm dopaminergic neurons to die. In addition to aging, one of the few established contributors to PD appears to be a rural lifestyle, where exposure to soil on a regular basis might increase the risk of interaction with bacteria producing such toxins. Taken together, these data suggest that a novel toxicant within the Streptomyces genus might represent an environmental contributor to the progressive neurodegeneration that is associated with PD. View Full-Text
Keywords: neurodegeneration; Parkinson’s disease; C. elegans; Streptomyces venezuelae; natural product neurodegeneration; Parkinson’s disease; C. elegans; Streptomyces venezuelae; natural product
►▼ Show Figures 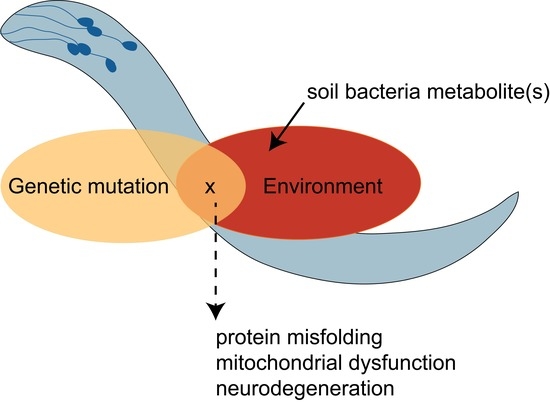 Caldwell, K.A.; Thies, J.L.; Caldwell, G.A. No Country for Old Worms: A Systematic Review of the Application of C. elegans to Investigate a Bacterial Source of Environmental Neurotoxicity in Parkinson’s Disease. Metabolites 2018, 8, 70. https://doi.org/10.3390/metabo8040070


Caldwell KA, Thies JL, Caldwell GA. No Country for Old Worms: A Systematic Review of the Application of C. elegans to Investigate a Bacterial Source of Environmental Neurotoxicity in Parkinson’s Disease. Metabolites. 2018; 8(4):70. https://doi.org/10.3390/metabo8040070


Caldwell, Kim A., Jennifer L. Thies, and Guy A. Caldwell 2018. "No Country for Old Worms: A Systematic Review of the Application of C. elegans to Investigate a Bacterial Source of Environmental Neurotoxicity in Parkinson’s Disease" Metabolites 8, no. 4: 70. https://doi.org/10.3390/metabo8040070