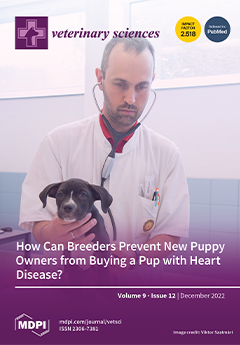 Cover Story (view full-size image): The arrival of a puppy to its new owner is always a very special moment. Because most people consider a dog as a family member, it is like when a child is born. This joyful happening should not be shadowed by any worries, emotional or financial concerns, and especially not with such hidden health issues that can lead to suffering and early death of the pet, as well as to repeated veterinary visits, including potentially risky and expensive cardiac surgeries. Transparent communication from the breeders and veterinarians to the new owner candidates, along with careful cardiac auscultation at the first vaccination, should be sufficient to prevent such tragedies. In the study carried out by Drs. Vos and Szatmári, owners who happened to buy a dog with congenital heart disease were interviewed. The article describes their concerning findings. View this paper
Previous Issue
Volume 9, November
Next Issue
Volume 10, January
We use cookies on our website to ensure you get the best experience. Read more about our cookies here.
Accept
We have just recently launched a new version of our website. Help us to further improve by taking part in this short 5 minute survey here. here.
Never show this again