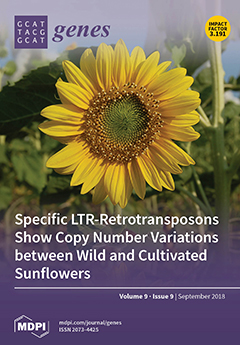 Cover Story (view full-size image): The involvement of retrotransposon mobilisation in crop plant domestication is far from being understood. Specific retrotransposon families of sunflower show considerable abundance variation between domesticated and wild genotypes. Interestingly, these retrotransposons lie close to the genes involved in many biochemical processes, especially in pathways related to biotic and abiotic stress responses, and might have contributed to the domesticated phenotype, affecting the expression of closer genes. View this paper.
Previous Issue
Volume 9, August
Next Issue
Volume 9, October
We use cookies on our website to ensure you get the best experience. Read more about our cookies here.
Accept
We have just recently launched a new version of our website. Help us to further improve by taking part in this short 5 minute survey here. here.
Never show this again