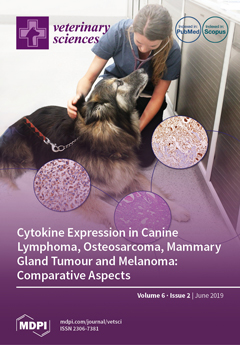 Cover Story (view full-size image): Cytokines are produced by both cancer cells and the tumour microenvironment, and play an important role in many processes underlining cancer growth and progression, including but not limited to angiogenesis, cell proliferation, and cell adhesion. Using a comparative approach, this review explores the pro- and occasionally anti-tumourigenic potential of cytokines in those canine tumours that are considered excellent translational models: lymphoma, osteosarcoma, mammary gland tumours, and melanoma. In veterinary oncology, cytokines may thus provide a reliable contribution in setting up new screening tests, defining the prognostic signature of selected cancers and designing new therapeutic strategies. View this paper
Previous Issue
Volume 6, March
Next Issue
Volume 6, September
We use cookies on our website to ensure you get the best experience. Read more about our cookies here.
Accept
We have just recently launched a new version of our website. Help us to further improve by taking part in this short 5 minute survey here. here.
Never show this again