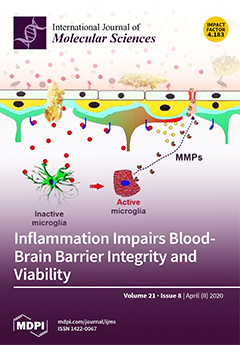 Cover Story (view full-size image): In this review article, we discuss the effects of traumatic brain injury (TBI) on the cerebrovascular system and the blood–brain barrier (BBB), where damage to the BBB further contributes to the loss of neural tissue and impairs neuroprotection. Additionally, we discuss the post-traumatic impacts of chronic smoking, which has been shown to damage BBB viability by promoting inflammation and oxidative stress, thus acting as a premorbid condition that worsens the TBI outcome. View this paper.
Previous Issue
Volume 21, April-1
Next Issue
Volume 21, May-1
We use cookies on our website to ensure you get the best experience. Read more about our cookies here.
Accept
We have just recently launched a new version of our website. Help us to further improve by taking part in this short 5 minute survey here. here.
Never show this again