RT-qPCR Testing of SARS-CoV-2: A Primer
Previous Article in Journal

Parkinson’s disease (PD) is the second most common neurodegenerative disease and although many studies have been done on this disease, the underlying mechanisms are still poorly understood and further studies are warranted. Therefore, this study identified circRNA expression profiles in the cerebral cortex (CC), hippocampus (HP), striatum (ST), and cerebellum (CB) regions of the 1-methyl-1,2,3,6-tetrahydropyridine (MPTP)-induced PD mouse model using RNA sequencing (RNA-seq), and differentially expressed circRNA were validated using reverse transcription quantitative real-time PCR (qRT-PCR). Gene ontology (GO), Kyoto Encyclopedia of Genes and Genomes (KEGG) pathway, and competing endogenous RNA (ceRNA) network analyses were also performed to explore the potential function of circRNAs. The results show that, compared with the control group, 24, 66, 71, and 121 differentially expressed circRNAs (DE-circRNAs) were found in the CC, HP, ST, and CB, respectively. PDST vs. PDCB, PDST vs. PDHP, and PDCB vs. PDHP groups have 578, 110, and 749 DE-circRNAs, respectively. Then, seven DE-cirRNAs were selected for qRT-PCR verification, where the expressions were consistent with the sequencing analysis. The GO and KEGG pathway analyses revealed that these DE-circRNAs participate in several biological functions and signaling pathways, including glutamic synapse, neuron to neuron synapse, cell morphogenesis involved in neuron differentiation, Parkinson’s disease, axon guidance, cGMP-PKG signaling pathway, and PI3K-Akt signaling pathway. Furthermore, the KEGG analysis of the target genes predicted by DE-circRNAs indicated that the target genes predicted by mmu_circRNA_0003292, mmu_circRNA_0001320, mmu_circRNA_0005976, and mmu_circRNA_0005388 were involved in the PD-related pathway. Overall, this is the first study on the expression profile of circRNAs in the different brain regions of PD mouse model. These results might facilitate our understanding of the potential roles of circRNAs in the pathogenesis of PD. Moreover, the results also indicate that the mmu_circRNA_0003292-miRNA-132-Nr4a2 pathway might be involved in the regulation of the molecular mechanism of Parkinson’s disease. View Full-Text
Keywords: Parkinson’s disease; circular RNAs; transcriptome; different brain region Parkinson’s disease; circular RNAs; transcriptome; different brain region
►▼ Show Figures 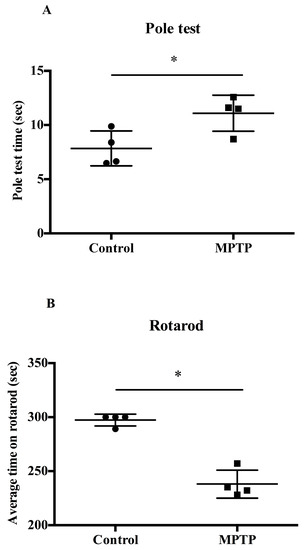