FGCaMP7, an Improved Version of Fungi-Based Ratiometric Calcium Indicator for In Vivo Visualization of Neuronal Activity
Next Article in Special Issue

Novel Insights into the Pathogenesis of Spinal Sarcopenia and Related Therapeutic Approaches: A Narrative Review
Previous Article in Special Issue

While two mouse NANOS paralogues, NANOS2 and NANOS3, are crucial for maintenance of germ cells by suppression of apoptosis, the mouse NANOS1 paralogue does not seem to regulate these processes. Previously, we described a human NANOS1 p.[(Pro34Thr);(Ser83del)] mutation associated with the absence of germ cells in seminiferous tubules of infertile patients, which might suggest an anti-apoptotic role of human NANOS1. In this study, we aimed to determine a potential influence of human NANOS1 on the maintenance of TCam-2 model germ cells by investigating proliferation, cell cycle, and apoptosis. Constructs encoding wild-type or mutated human NANOS1 were used for transfection of TCam-2 cells, in order to investigate the effect of NANOS1 on cell proliferation, which was studied using a colorimetric assay, as well as apoptosis and the cell cycle, which were measured by flow cytometry. RNA-Seq (RNA sequencing) analysis followed by RT-qPCR (reverse transcription and quantitative polymerase chain reaction) was conducted for identifying pro-apoptotic genes repressed by NANOS1. Here, we show that overexpression of NANOS1 downregulates apoptosis in TCam-2 cells. Moreover, we found that NANOS1 represses a set of pro-apoptotic genes at the mRNA level. We also found that the infertility-associated p.[(Pro34Thr);(Ser83del)] mutation causes NANOS1 to functionally switch from being anti-apoptotic to pro-apoptotic in the human male germ cell line. Thus, this report is the first to show an anti-apoptotic role of NANOS1 exerted by negative regulation of mRNAs of pro-apoptotic genes. View Full-Text
Keywords: NANOS1; apoptosis; cell cycle; human infertility; NANOS1 mutation NANOS1; apoptosis; cell cycle; human infertility; NANOS1 mutation
►▼ Show Figures 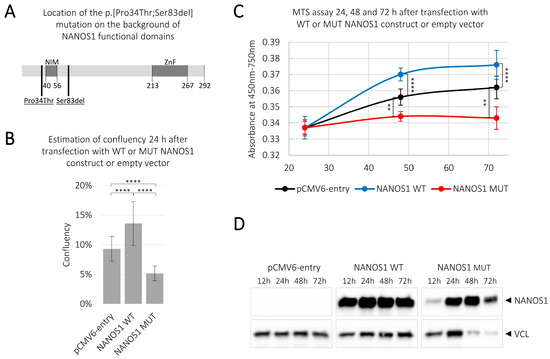