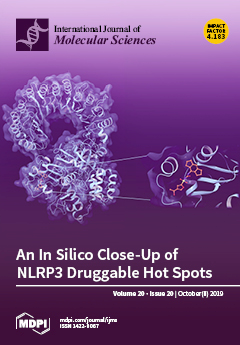 Cover Story (view full-size image): The present study was focused on NLRP3 inflammasome, a cytosolic complex that coordinates innate immunity responses. When over-activated, NLRP3 seems to be linked to several chronic pathologies, thus appears as an appealing target for the development of new therapeutic drugs. For this purpose, NLRP3 homology model was built and the putative protein binding region of a non-covalent inhibitor MCC950 (used as a probe) was investigated using a combination of in silico techniques. The main aim was to detect putative protein hot spots involved in the stabilization of protein-ligand complex. View this paper.
Previous Issue
Volume 20, October-1
Next Issue
Volume 20, November-1
We use cookies on our website to ensure you get the best experience. Read more about our cookies here.
Accept
We have just recently launched a new version of our website. Help us to further improve by taking part in this short 5 minute survey here. here.
Never show this again