WIN55,212-2-Induced Expression of Mir-29b1 Favours the Suppression of Osteosarcoma Cell Migration in a SPARC-Independent Manner

WIN55,212-2 (WIN) is a synthetic agonist of cannabinoid receptors that displays promising antitumour properties. The aim of this study is to demonstrate that WIN is able to block the migratory ability of osteosarcoma cells and characterize the mechanisms involved. Using wound healing assay and zymography, we showed that WIN affects cell migration and reduces the activity of the metalloproteases MMP2 and MMP9. This effect seemed to be independent of secreted protein acidic and rich in cysteine (SPARC), a matricellular protein involved in tissue remodeling and extracellular matrix deposition. SPARC release was indeed prevented by WIN, and SPARC silencing by RNA interference did not influence the effect of the cannabinoid on cell migration. WIN also increased the release of extracellular vesicles and dramatically upregulated miR-29b1, a key miRNA that modulates cell proliferation and migration. Interestingly, reduced cell migration was observed in stably miR-29b1-transfected cells, similarly to WIN-treated cells. Finally, we show the absence of SPARC in the extracellular vesicles released by osteosarcoma cells and no changes in SPARC level in miR-29b1 overexpressing cells. Overall, these findings suggest that WIN markedly affects cell migration, dependently on miR-29b1 and independently of SPARC, and can thus be considered as a potential innovative therapeutic agent in the treatment of osteosarcoma. View Full-Text
Keywords: osteosarcoma; cannabinoids; cell migration; miR-29b1; SPARC osteosarcoma; cannabinoids; cell migration; miR-29b1; SPARC
►▼ Show Figures 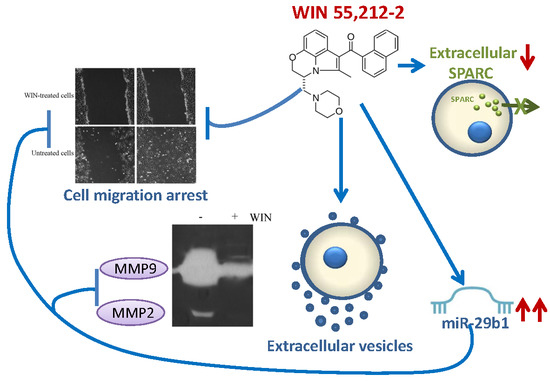