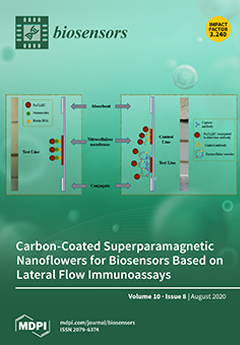 Cover Story (view full-size image): Superparamagnetic iron oxide nanoflowers were synthesized by a one-pot solvothermal route, and characterized (size, morphology, chemical composition, and magnetic properties) to be used as labels in lateral flow immunoassays. Their structure consists of several superparamagnetic cores embedded in a carbon coating with carboxylic groups adequate for bioconjugation using the carbodiimide chemistry. A magnetic lateral flow immunoassay was developed for extracellular vesicle (a novel source of biomarkers) detection directly in a plasma sample. The method showed a low limit of detection (4 × 106 EVs/µL) and a reproducibility (RSD) of 3% (n = 3). In addition, these nanoparticles are easy to concentrate by means of a magnet. This feature makes them promising candidates to be used in immunoseparation to enhance the limit of detection. View this paper.
Previous Issue
Volume 10, July
Next Issue
Volume 10, September
We use cookies on our website to ensure you get the best experience. Read more about our cookies here.
Accept
We have just recently launched a new version of our website. Help us to further improve by taking part in this short 5 minute survey here. here.
Never show this again