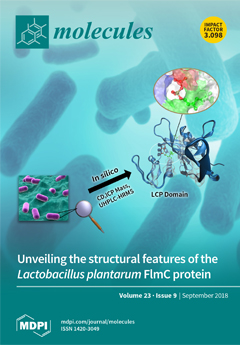 Cover Story (view full-size image): Biofilm development by probiotics, such as Lactobacilli, promote their colonization in the mucosa of the host, reinforcing the mechanism of the competitive exclusion of pathogens. Lactobacillus plantarum is one of the most predominant species in healthy human microbiota. We characterized the structural features of FlmC, a L. plantarum protein involved in biofilm development. The results, which also revealed the presence of a bound lipid molecule and of a Mg(II) ion, suggest that FlmC belongs to the LytR-CpsA-Psr family whose members are involved in cell-wall maintenance. View this paper.
Previous Issue
Volume 23, August
Next Issue
Volume 23, October
We use cookies on our website to ensure you get the best experience. Read more about our cookies here.
Accept
We have just recently launched a new version of our website. Help us to further improve by taking part in this short 5 minute survey here. here.
Never show this again