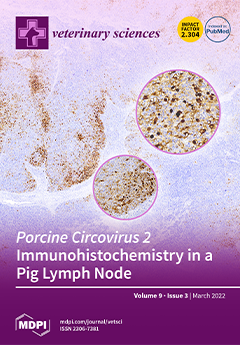 Cover Story (view full-size image): An immunohistochemical technique was used to detect Porcine circovirus 2 (PCV-2) Cap protein in a mediastinal lymph node of a pig affected by PCV-2-systemic disease. The diagnosis of this condition is based on three main criteria, including clinical signs (mainly wasting and respiratory distress), moderate to severe lymphocyte depletion and, granulomatous inflammation of the lymphoid tissues and moderate to high amount of PCV-2 antigen in these tissues. The picture is representative of this last diagnostic criterion, with the presence of moderate viral antigen within the citoplasma of macrophages, mainly located in follicular and parafollicular areas. View this paper
Previous Issue
Volume 9, February
Next Issue
Volume 9, April
We use cookies on our website to ensure you get the best experience. Read more about our cookies here.
Accept
We have just recently launched a new version of our website. Help us to further improve by taking part in this short 5 minute survey here. here.
Never show this again