Submit to Foods Review for Foods 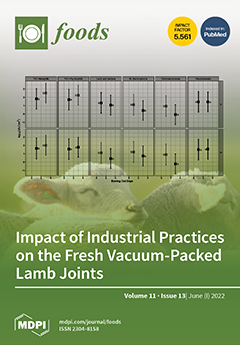 Cover Story (view full-size image): The impact of different industrial practices at lamb export abattoirs in Ireland on the microbial and quality attributes of fresh vacuum-packed (VP) lamb leg joints, including Clean Livestock Policy (CLP), fleece clipping, carcass chilling times and vacuum pack storage, at typical chill and retail display temperatures was investigated. Five separate slaughter batches of lamb (ranging in size from 38 to 60 lambs) were followed at two lamb export plants over a two-year period, accounting for seasonal variation. In general, fleece clipping resulted in significantly lower microbial contamination on the fleece than the use of CLP alone. View this paper
Previous Issue
Volume 11, June-2
Next Issue
Volume 11, July-2
We use cookies on our website to ensure you get the best experience. Read more about our cookies here.
Accept
We have just recently launched a new version of our website. Help us to further improve by taking part in this short 5 minute survey here. here.
Never show this again