Combination of Chitosan, Tea Polyphenols, and Nisin on the Bacterial Inhibition and Quality Maintenance of Plant-Based Meat

The impact of different industrial practices at lamb export abattoirs in Ireland on the microbial and quality attributes of fresh vacuum-packed (VP) lamb leg joints, including Clean Livestock Policy (CLP), fleece clipping, carcass chilling times and vacuum pack storage, at typical chill and retail display temperatures was investigated. Five separate slaughter batches of lamb (ranging in size from 38 to 60 lambs) were followed at two lamb export plants over a two-year period, accounting for seasonal variation. In general, fleece clipping resulted in significantly lower microbial contamination on the fleece than the use of CLP alone. Lamb from carcasses chilled for 24 h had significantly lower psychrophilic total viable counts and Brochothrix thermosphacta and pseudomonad counts than carcasses chilled for 72 h. Following vacuum-packed (VP) storage of meat from these carcasses at 1.7 ± 1.6 °C for 23 days in the meat plant followed by retail display at 3.9 ± 1.7 °C (up to day 50), the dominant microorganisms were lactic acid bacteria, Br. thermosphacta, Enterobacteriaceae and pseudomonads, and all had reached maximum population density by storage day 34. Aligned with this, after day 34, the quality of the raw meat samples also continued to deteriorate, with off-odours and colour changes developing. While the mean values for cooked meat eating quality attributes did not change significantly over the VP storage period, high variability in many attributes, including off-flavours and off-odours, were noted for lamb meat from all storage times, highlighting inconsistences in lamb quality within and between slaughter batches. View Full-Text
Keywords: fleece; lamb carcass; chilling length; microbial load; meat quality; shelf-life fleece; lamb carcass; chilling length; microbial load; meat quality; shelf-life
►▼ Show Figures 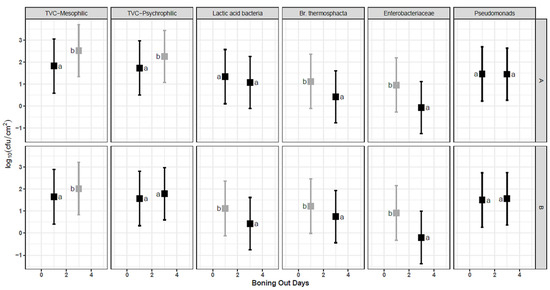