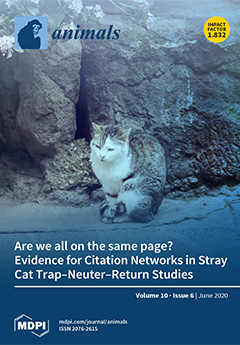 Cover Story (view full-size image): Trap–neuter–return and its variants (TNR) aims to control unowned cat populations. Papers on TNR are a prime example of how a literature grows, papers become influential, and citation networks form, influencing future study and public perceptions. We analyzed 145 TNR studies published in 2002–2019, identifying papers considered influential because of high overall citations, high average citations/year, or frequent mentions in social media. Open Access papers were more influential in social media, raising greater public awareness than studies published in subscription journals. While divergent views exist, network analysis of the TNR literature indicated the potential for forming self-reinforcing groups of authors. While diverse views are expressed, there is a risk of reduced dialogue among groups, potentially constraining debate to refine arguments, share information, or plan research. View this paper.
Previous Issue
Volume 10, May
Next Issue
Volume 10, July
We use cookies on our website to ensure you get the best experience. Read more about our cookies here.
Accept
We have just recently launched a new version of our website. Help us to further improve by taking part in this short 5 minute survey here. here.
Never show this again