The inclusion of fiber in pigs’ commercial diets may represent an opportunity to reduce feeding costs and benefit animals’ health and welfare. However, antinutritional factors that generate a bitter taste may reduce the voluntary intake of animals. The present experiments evaluated growing pigs’ feeding behavior for winter and summer brassicas, when incorporated on commercial diets as a replacement for wheat middlings. Experiment 1 studied the feeding behavior of pigs when summer turnip or forage rape were included into the diets, while experiment 2 studied the inclusion of kale and swede by replacing 15% of wheat middlings. No differences were found between diets that included brassicas and control diet in pigs’ acceptability or palatability. However, during preference tests of experiment 2 (winter brassicas), diet that incorporated swede presented a higher consumption than control diet and a diet that incorporated kale. This suggests that brassica forage may be incorporated in growing pigs’ diets without negative repercussions in animals’ oral perception during short term feeding tests. 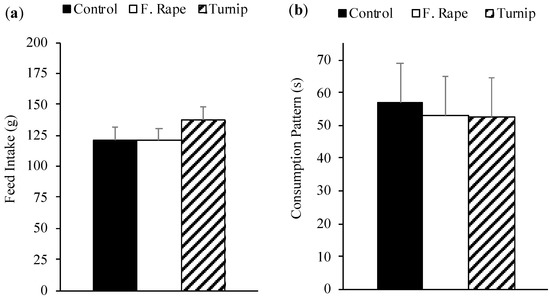