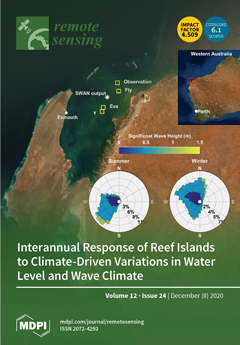 Cover Story (view full-size image): We applied a semi-automated shoreline detection technique to 20 years of publicly available satellite imagery to investigate the evolution of a group of reef islands located in the Eastern Indian Ocean. At interannual timescales, island changes were characterized by the cyclical re-organization of island shorelines in response to the variability in water levels and wave conditions. Interannual variability in forcing parameters was driven by El Niño Southern Oscillation (ENSO) cycles, causing prolonged changes to water levels and wave conditions that established new equilibrium island morphologies. Our results present a new opportunity to measure intermediate temporal scale changes in island morphology that can complement existing short-term (weekly to seasonal) and long-term (decadal) understanding of reef island evolution. View this paper
Previous Issue
Volume 12, December-1
Next Issue
Volume 13, January-1
We use cookies on our website to ensure you get the best experience. Read more about our cookies here.
Accept
We have just recently launched a new version of our website. Help us to further improve by taking part in this short 5 minute survey here. here.
Never show this again