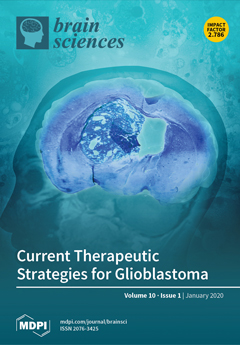 Cover Story (view full-size image): Glioblastoma (GB) are a grade IV aggressive brain tumor with limited treatment options available (chemo- and radiation therapy). The usual lifespan of patients is about 18 months following treatment. To extend the quality of life beyond this boundary, better approaches are necessary, such as targeted gene and drug therapy, use of oncolytic virus, and nutraceuticals. Some of these treatments can reach the GB brain, crossing the blood–brain barrier following systemic injections; however, most of them are failing. To overcome this issue, we and others have used nanoparticles as a vehicle to deliver therapeutics to the brain following systemic injections. View this paper
Previous Issue
Volume 9, December
Next Issue
Volume 10, February
We use cookies on our website to ensure you get the best experience. Read more about our cookies here.
Accept
We have just recently launched a new version of our website. Help us to further improve by taking part in this short 5 minute survey here. here.
Never show this again