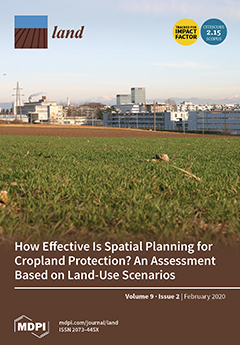 Cover Story (view full-size image): Cropland preservation is of the utmost importance to achieve food security for the world’s growing population. The expansion of urban areas as a consequence of population growth is a major threat to cropland worldwide, and spatial planning is the means to contain urban sprawl and protect cropland area. However, it is not clear which planning decisions must be taken today in order to protect sufficient cropland area for the future. The impact of planning decisions on land-take can be simulated with land-use scenarios. Our land-use scenarios for Switzerland showed that revisions in the planning legislation would reduce future land-take on cropland compared to the past trend. However, in most parts of the country, land-take on cropland will still exceed what is necessary given the expected population growth.View this paper.
Previous Issue
Volume 9, January
Next Issue
Volume 9, March
We use cookies on our website to ensure you get the best experience. Read more about our cookies here.
Accept
We have just recently launched a new version of our website. Help us to further improve by taking part in this short 5 minute survey here. here.
Never show this again