Protected Areas as a Center of Attraction for Visits from World Heritage Cities: Extremadura (Spain)
Next Article in Special Issue

30 Years of Land Cover Change in Connecticut, USA: A Case Study of Long-Term Research, Dissemination of Results, and Their Use in Land Use Planning and Natural Resource Conservation
Previous Article in Journal

This article presents methodology of land use change assessment in the context of sustainable development and the results of its application based on the transformations that occurred in individual areas of Europe in the years 2012–2018. This method is based on data from the CORINE (CO-oRdination of INformation on Environment) Land Cover program) and local government units presenting the degree of urbanization (DEGURBA). The transformations taking place in space were evaluated and reduced to economic, social, and environmental dimensions. We then analyzed the results in terms of space (covering almost all of Europe) and in terms of division (large cities, small towns, suburbs, and rural areas). Results indicate that development of the economic dimension most often takes place at the expense of natural resources. It was also determined that the higher the population density, the greater the sustainable development differentiation level in the analyzed dimensions, of which the social dimension was characterized by the lowest differentiation and the economic dimension was highest. The development of rural areas was found to be less sustainable than large urban centers. Interpretation of the results also leads to the conclusion that areas of Europe are very diverse in terms of sustainable development. However, the method itself, despite the imperfections observed by the authors, may be used in further or similar studies. View Full-Text
Keywords: sustainability; development; land use change; Corine Land Cover sustainability; development; land use change; Corine Land Cover
►▼ Show Figures 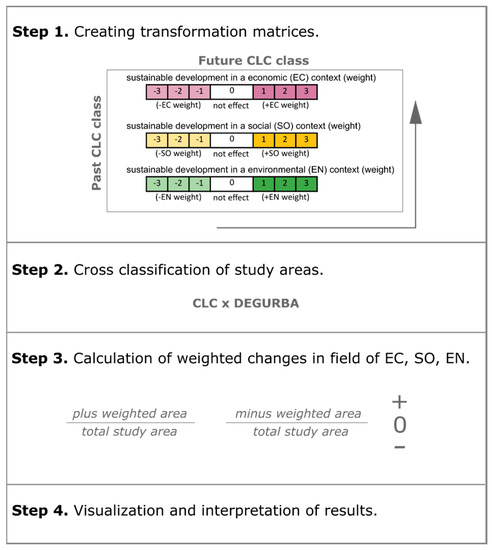