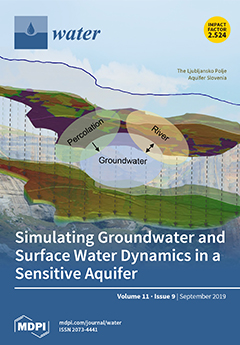 Cover Story (view full-size image): Understanding interactions between strongly connected groundwater and surface water is important when studying the water balance of a complex aquatic system. Such a research often requires not only an integrated approach but also using a comprehensive modelling framework. Since boundary conditions are essential for simulating groundwater flow in a sensitive aquifer, e.g. the Ljubljansko polje aquifer in Slovenia, a modelling system of rivers and channels (MIKE 11) and water flow and balance simulation model (WaSiM) can be used to model river dynamics and the percolation of local precipitation, respectively. They can then be used as boundary conditions imposed on a transient state groundwater flow model performed in finite element subsurface flow simulation system (FEFLOW). These tools offer a good solution for performing simulations of groundwater and surface water dynamics. View this paper.
Previous Issue
Volume 11, August
Next Issue
Volume 11, October
We use cookies on our website to ensure you get the best experience. Read more about our cookies here.
Accept
We have just recently launched a new version of our website. Help us to further improve by taking part in this short 5 minute survey here. here.
Never show this again