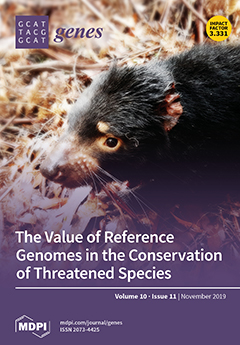 Cover Story (view full-size image): Globally, we find ourselves in the midst of a biodiversity crisis and in need of conservation tools to help preserve the species that remain. Advances in sequencing technologies and reduction in sequencing costs have given rise to the era of genomics. Whole-genome data can provide answers to a variety of crucial conservation questions including understanding demography and population structure, minimising inbreeding, maximising adaptive potential, and identifying the basis of important phenotypic traits. Incorporation of genomic data to assist in the recovery of threatened species is vital; however, it is often unclear how reference genomes facilitate the use of genomics in management practice. In this review we use the Tasmanian devil as a model to demonstrate specific examples of how a reference genome can aid management actions in the conservation of threatened species. View this paper.
Previous Issue
Volume 10, October
Next Issue
Volume 10, December
We use cookies on our website to ensure you get the best experience. Read more about our cookies here.
Accept
We have just recently launched a new version of our website. Help us to further improve by taking part in this short 5 minute survey here. here.
Never show this again