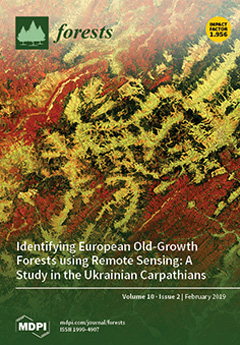 Cover Story (view full-size image): Natural forests that have not been disturbed for many decades are called old-growth forest (OGF.) These forests are important as stores of carbon and biodiversity, but are rare and threatened, particularly in Europe where very little remains. We demonstrate that publically available satellite images combined with Random Forest image classification can be used to identify OGF in the Ukrainian Carpathians. The identification and protection of OGF is a priority for environmental organisations, and we hope our research can encourage the use of remote sensing in this important work. View this paper.
Previous Issue
Volume 10, January
Next Issue
Volume 10, March
We use cookies on our website to ensure you get the best experience. Read more about our cookies here.
Accept
We have just recently launched a new version of our website. Help us to further improve by taking part in this short 5 minute survey here. here.
Never show this again