Timing is Not Everything: Assessing the Efficacy of Pre- Versus Post-Harvest Herbicide Applications in Mitigating the Burgeoning Birch Phenomenon in Regenerating Hardwood Stands
Previous Article in Journal

Managing competing vegetation is crucial in stand establishment strategies; forecasting the abundance, composition, and impact of competing vegetation after harvesting is needed to optimize silviculture scenarios and maintain long-term site productivity. Our main objective was to identify factors influencing the short-term abundance and composition of competing vegetation over a large area of the Canadian boreal forest. Our second objective was to better understand the mid-term evolution of the regeneration/competing vegetation complex in cases of marginal regeneration conditions. We used operational regeneration surveys of 4471 transects sampled ≈5 years after harvesting that contained data on regeneration, competing vegetation, elevation, ecological classification, soil attributes, and pre-harvest forest stands. We performed a redundancy analysis to identify the relationships between competing vegetation, harvesting and biophysical variables. We then estimated the probability of observing a given competing species cover based on these variables. In 2015, we re-sampled a portion of the sites, where conifer regeneration was marginal early after harvesting, to assess the temporal impact of different competing levels and species groups on the free-to-grow stocking, vigour and basal area of softwood regeneration. Results from the first inventory showed that, after careful logging around advance growth, ericaceous shrubs and hardwoods were not associated with the same sets of site attributes. Ericaceous shrubs were mainly found on low fertility sites associated with black spruce (Picea mariana (Mill.) BSP) or jack pine (Pinus banksiana Lamb.). The distinction between suitable environments for commercial shade-intolerant hardwoods and non-commercial hardwoods was less clear, as they responded similarly to many variables. Analysis of data from the second inventory showed a significant improvement in conifer free-to-grow stocking when commercial shade-intolerant hardwood competing levels were low (stocking 0%–40%) and when ericaceous shrubs competing levels were moderate (percent cover 26%–75%). In these conditions of marginal regeneration, the different types and intensities of competition did not affect the vigour or basal area of softwood regeneration, 9–14 years after harvesting. View Full-Text
Keywords: silviculture; natural regeneration; careful logging around advance growth; boreal forest; conifer; competing vegetation silviculture; natural regeneration; careful logging around advance growth; boreal forest; conifer; competing vegetation
►▼ Show Figures 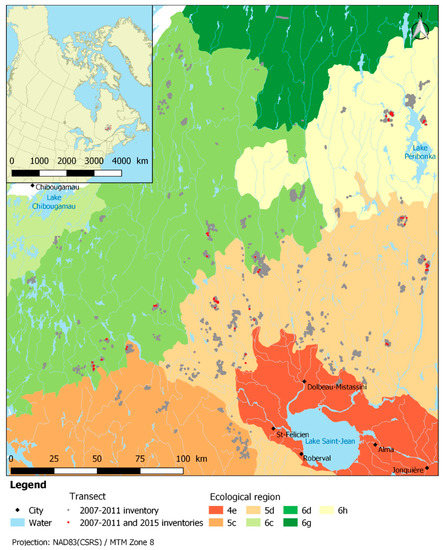