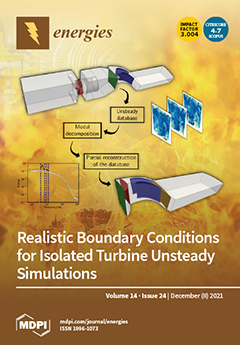 Cover Story (view full-size image): Numerical simulation of multiple components in turbomachinery applications is very CPU demanding but remains necessary to capture the proper coupling and a reliable flow prediction in most cases. The use of realistic boundary conditions capable of accurately reproducing this coupling between components at a lower cost is of great interest. This paper presents a method able to generate more realistic boundary conditions for isolated turbine Large-Eddy Simulation (LES). The unsteady boundary conditions to be used at the inflow of the isolated turbine LES are built from the modal decomposition of the database recorded at the interface between the two components of the integrated LES simulation. The results demonstrate the capacity of this type of conditions to reproduce the coupling between the combustion chamber and the turbine when standard conditions cannot.View this paper
Previous Issue
Volume 14, December-1
Next Issue
Volume 15, January-1
We use cookies on our website to ensure you get the best experience. Read more about our cookies here.
Accept
We have just recently launched a new version of our website. Help us to further improve by taking part in this short 5 minute survey here. here.
Never show this again