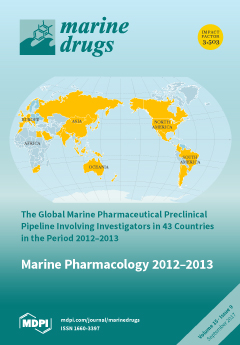 Cover Story (view full-size image): The peer-reviewed marine pharmacology literature from 2012 to 2013 was systematically reviewed, consistent with the 1998–2011 reviews of this series. The preclinical pharmacology of compounds isolated from marine organisms revealed antibacterial, antifungal, antiprotozoal, antituberculosis, antiviral and anthelmitic activities for 113 marine natural products. In addition, 75 marine compounds were reported to have antidiabetic and anti-inflammatory activities. Finally, 69 marine compounds were shown to display miscellaneous mechanisms of action which could contribute to novel pharmacological classes. Thus, in 2012–2013, the preclinical marine natural product pharmacology pipeline provided novel pharmacology and lead compounds to the clinical marine pharmaceutical pipeline, and contributed significantly to potentially novel therapeutic approaches to several global disease categories. View Paper here
Previous Issue
Volume 15, August
Next Issue
Volume 15, October
We use cookies on our website to ensure you get the best experience. Read more about our cookies here.
Accept
We have just recently launched a new version of our website. Help us to further improve by taking part in this short 5 minute survey here. here.
Never show this again