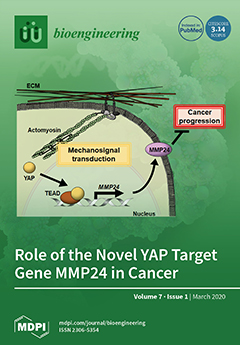 Cover Story (view full-size image): Mechanical environments surrounding cancer cells, which include stiffness of the extracellular matrix, are altered during tumor progression and influence cell behaviors. In this study, we show that stiff matrices, through activation of the mechanotransducer YAP, increase the expression of MMP24, which encodes the membrane-type matrix metaroprotease-24. In addition, based on the human protein atlas database, high MMP24 expression is correlated with the prolonged overall survival rate of patients for several cancers, including breast cancer. View this paper.
Previous Issue
Volume 6, December
Next Issue
Volume 7, June
We use cookies on our website to ensure you get the best experience. Read more about our cookies here.
Accept
We have just recently launched a new version of our website. Help us to further improve by taking part in this short 5 minute survey here. here.
Never show this again