3D Printing of Gelled and Cross-Linked Cellulose Solutions; an Exploration of Printing Parameters and Gel Behaviour
Next Article in Special Issue

Among the different tools which can be studied and managed to tailor-make polyhydroxyalkanoates (PHAs) and enhance their production, bacterial strain and carbon substrates are essential. The assimilation of carbon sources is dependent on bacterial strain’s metabolism and consequently cannot be dissociated. Both must wisely be studied and well selected to ensure the highest production yield of PHAs. Halomonas sp. SF2003 is a marine bacterium already identified as a PHA-producing strain and especially of poly-3-hydroxybutyrate (P-3HB) and poly-3-hydroxybutyrate-co-3-hydroxyvalerate (P-3HB-co-3HV). Previous studies have identified different genes potentially involved in PHA production by Halomonas sp. SF2003, including two phaC genes with atypical characteristics, phaC1 and phaC2. At the same time, an interesting adaptability of the strain in front of various growth conditions was highlighted, making it a good candidate for biotechnological applications. To continue the characterization of Halomonas sp. SF2003, the screening of carbon substrates exploitable for PHA production was performed as well as production tests. Additionally, the functionality of both PHA synthases PhaC1 and PhaC2 was investigated, with an in silico study and the production of transformant strains, in order to confirm and to understand the role of each one on PHA production. The results of this study confirm the adaptability of the strain and its ability to exploit various carbon substrates, in pure or mixed form, for PHA production. Individual expression of PhaC1 and PhaC2 synthases in a non-PHA-producing strain, Cupriavidus necator H16 PHB¯4 (DSM 541), allows obtaining PHA production, demonstrating at the same time, functionality and differences between both PHA synthases. All the results of this study confirm the biotechnological interest in Halomonas sp. SF2003. View Full-Text
Keywords: halophilic bacteria; polyhydroxyalkanoates (PHAs); PHA synthases halophilic bacteria; polyhydroxyalkanoates (PHAs); PHA synthases
►▼ Show Figures 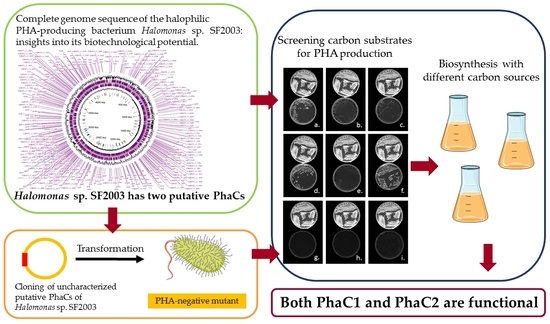