Submit to Toxics Review for Toxics 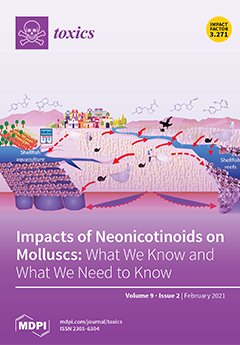 Cover Story (view full-size image): The use of neonicotinoid insecticides has been steadily increasing in many countries, despite bans on their use by the European Union and Canada. Among the main concerns have been their impacts on non-target invertebrates, including molluscs. Increasing evidence from studies on terrestrial, freshwater and marine molluscs have demonstrated the detrimental effects of concentrations of neonicotinoids that have been detected in soil, food and water. The accumulation of neonicotinoid residues in the flesh of molluscs can also cause the accidental exposure of other organisms higher in the food chain, including humans. Further studies are required using all commercially available neonicotinoids, across all life stages of a broad range of ecologically and economically valuable molluscs, to comprehensively understand the magnitude of impacts from ongoing neonicotinoid use. View this paper
Previous Issue
Volume 9, January
Next Issue
Volume 9, March
We use cookies on our website to ensure you get the best experience. Read more about our cookies here.
Accept
We have just recently launched a new version of our website. Help us to further improve by taking part in this short 5 minute survey here. here.
Never show this again