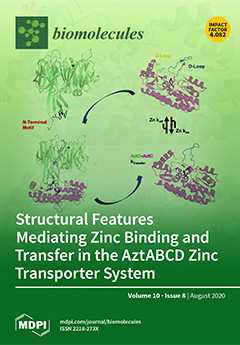 Cover Story (view full-size image): Zinc homeostasis is critical for bacterial survival and virulence. Extracellular zinc-binding proteins play an important role in this process. The ATP-binding cassette (ABC) transporter system AztABCD includes two periplasmic proteins, AztC and AztD. Both bind zinc with high affinity and specificity. Further, AztD can transfer zinc to AztC, which can then deliver the metal to the membrane permease (AztB) for import into the cell. These processes are highly specific and rely on conserved structural features of each protein. This work assesses the role of several flexible or unstructured sequences in zinc binding and transfer from AztD to AztC. The results provide insights into the dynamic nature of these processes and support a previously proposed structural model of transfer. View this paper.
Previous Issue
Volume 10, July
Next Issue
Volume 10, September
We use cookies on our website to ensure you get the best experience. Read more about our cookies here.
Accept
We have just recently launched a new version of our website. Help us to further improve by taking part in this short 5 minute survey here. here.
Never show this again