Submit to Biology Review for Biology 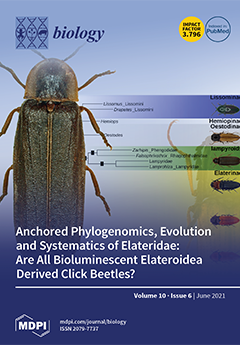 Cover Story (view full-size image): In this Special Issue, Douglas et al. develop a new RNA probe set to obtain DNA sequence data from 2260 nuclear genes from the Elateridae or click beetles. The resulting phylogeny resolves long-standing taxonomic questions reflecting evolutionary events as distant as the Mesozoic Era. However, this phylogeny shows that the predatory fireflies and their closest relatives also evolved from within the Elateridae. This implies new taxonomic family-group arrangements are needed for the 12,500 species in the four included beetle families. It also means that some agriculturally harmful elaterid (or wireworm) species are more closely related to agriculturally beneficial predaceous fireflies than they are to other wireworm crop pest genera. View this paper
Previous Issue
Volume 10, May
Next Issue
Volume 10, July
We use cookies on our website to ensure you get the best experience. Read more about our cookies here.
Accept
We have just recently launched a new version of our website. Help us to further improve by taking part in this short 5 minute survey here. here.
Never show this again