Estimating the survival and reproductive ability caused by a transgene moved from a genetically engineered (GE) crop to its wild relative populations through gene flow plays an important role in assessing the potential environmental risks of the GE crop. Such estimation has essentially focused on the survival and reproduction-related characteristics above the ground, but with little attention to the GE seeds shattered in the soil seed banks. We demonstrated that the herbicide-resistant transgene overexpressing the rice endogenous EPSP enzyme increased the survival and longevity of the GE crop–wild (Oryza rufipogon) hybrid seeds in soil seed banks. In addition, enhanced survival and longevity of the GE hybrid seeds are likely associated with increases in seed dormancy and a growth hormone (auxin) via overexpressing the EPSPS transgene. Therefore, the EPSPS transgene can persist in the soil seed banks and spread in the environment, causing unwanted environmental impacts. 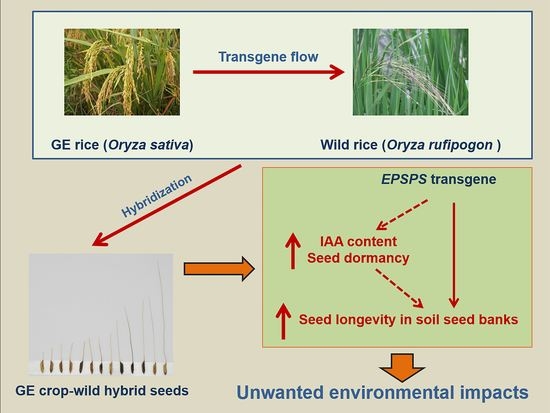