Submit to Catalysts Review for Catalysts 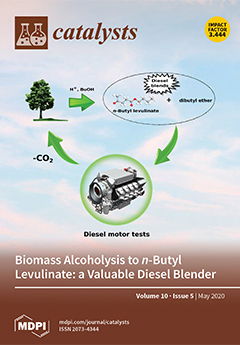 Cover Story (view full-size image): Direct alcoholysis of Eucalyptus nitens to n-butyl levulinate was optimized using univariate and multivariate approaches. The positive synergy between the n-butyl levulinate and the co-produced dibutyl ether toward Diesel motor performances was demonstrated. These oxygenated additives remarkably reduce CO and soot emissions of Diesel fuel. View this paper
Previous Issue
Volume 10, April
Next Issue
Volume 10, June
We use cookies on our website to ensure you get the best experience. Read more about our cookies here.
Accept
We have just recently launched a new version of our website. Help us to further improve by taking part in this short 5 minute survey here. here.
Never show this again