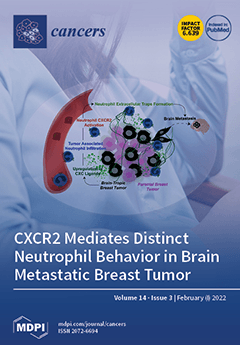 Cover Story (view full-size image): In this work, Safarulla et al. demonstrate in vitro that a subset of neutrophils could be reprogrammed distinctly into a metastasis-promoting state within a primary breast tumor microenvironment. Their results identify the activation of neutrophil receptor CXCR2 as a key regulator of not only the recruitment of Tumor-Associated Neutrophils towards brain-tropic variants of metastatic breast cancer, but also of Neutrophil Extracellular Traps formation with a unique tumor-aiding spatio-temporal dynamics. The authors show the potential utility of CXCR2 inhibitor in limiting neutrophil inflammation and the resultant suppression of tumor activity. This new perspective indicates that neutrophil reprogramming during tumorigenesis is a problem worthy of attention. Preventing or reversing this neutrophil behavior may be a potential strategy for better management of brain metastatic breast tumors. View this paper
Previous Issue
Volume 14, January-2
Next Issue
Volume 14, February-2
We use cookies on our website to ensure you get the best experience. Read more about our cookies here.
Accept
We have just recently launched a new version of our website. Help us to further improve by taking part in this short 5 minute survey here. here.
Never show this again