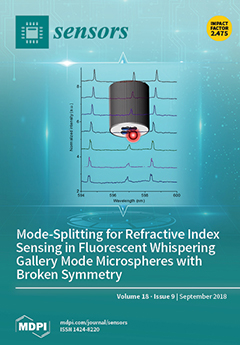 Cover Story (view full-size image): Whispering gallery mode (WGM) resonators have become increasingly diverse in terms of both architecture and applications, especially as refractometric sensors, allowing for unprecedented levels of sensitivity. However, like every refractometric sensor, a single WGM resonator cannot distinguish temperature variations from changes in surrounding refractive index (RI). Here, we investigate how breaking the symmetry of an otherwise perfect fluorescent microsphere, by covering half of the resonator with a high-RI glue, enables discrimination of temperature changes from variations in the surrounding RI. Our results open the door to simple self-referenced sensing techniques based on the analysis of split modes. View Paper here
Previous Issue
Volume 18, August
Next Issue
Volume 18, October
We use cookies on our website to ensure you get the best experience. Read more about our cookies here.
Accept
We have just recently launched a new version of our website. Help us to further improve by taking part in this short 5 minute survey here. here.
Never show this again