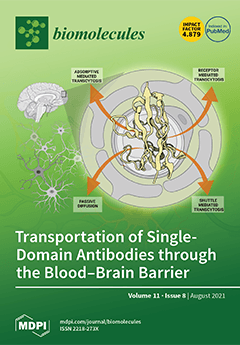 Cover Story (view full-size image): The small size, antigen specificity, plasticity, and potential to recognize unique conformational epitopes of single-domain antibodies (sdAb) represent a diagnostic and therapeutic opportunity for many central nervous system (CNS) pathologies. However, the blood–brain barrier (BBB) poses a challenge for their delivery into the brain parenchyma. This review analyzes different strategies and methods to transport sdAB through the BBB to fulfill their therapeutic, diagnostic, and theragnostic promises for the benefit of patients suffering from CNS pathologies. View this paper
Previous Issue
Volume 11, July
Next Issue
Volume 11, September
We use cookies on our website to ensure you get the best experience. Read more about our cookies here.
Accept
We have just recently launched a new version of our website. Help us to further improve by taking part in this short 5 minute survey here. here.
Never show this again