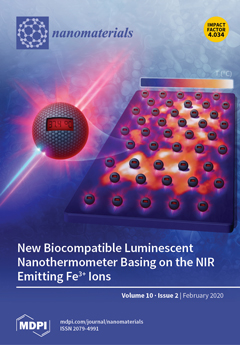 Cover Story (view full-size image): Luminescent thermometry is a contactless and noninvasive method of thermal imaging, basing on thermally affected spectroscopic properties of phosphors. A new approach, aiming to enhance the accuracy of temperature readouts relies on the implementation of strong thermal susceptibility of transition metal ions luminescence. In this paper, for the first time Fe3+-based nanocrystalline luminescent thermometer is shown. The biocompatible LiAl5O8:Fe3+ and LiAl5O8:Fe3+, Nd3+ nanocrystals exhibit intense red emissions of Fe3+ ions, located in the spectral range of 1st biological optical window, which undergo the thermal quenching in -150oC-300oC temperature range. View this paper.
Previous Issue
Volume 10, January
Next Issue
Volume 10, March
We use cookies on our website to ensure you get the best experience. Read more about our cookies here.
Accept
We have just recently launched a new version of our website. Help us to further improve by taking part in this short 5 minute survey here. here.
Never show this again