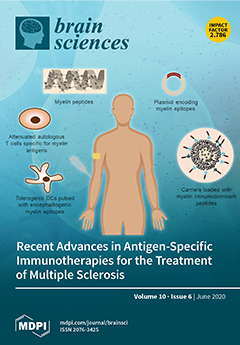 Cover Story (view full-size image): Multiple sclerosis (MS) is an autoimmune disease of the central nervous system and is considered to be the leading nontraumatic cause of neurological disability in young adults. The Holy Grail for the treatment of MS is to specifically suppress the disease while at the same time allow the immune system to be active against infections and malignancy. This could be achieved by developing immunotherapies designed to specifically suppress immune responses to myelin antigens. This study aims to review different myelin antigen-specific strategies for the prevention/treatment of MS and the challenges they face in being translated to MS patients. View this paper
Previous Issue
Volume 10, May
Next Issue
Volume 10, July
We use cookies on our website to ensure you get the best experience. Read more about our cookies here.
Accept
We have just recently launched a new version of our website. Help us to further improve by taking part in this short 5 minute survey here. here.
Never show this again