Submit to Agronomy Review for Agronomy 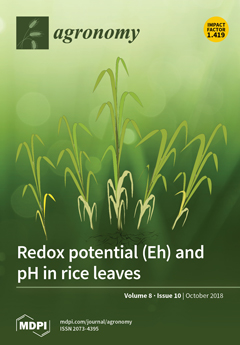 Cover Story (view full-size image): We developed a method for the direct measurement of leaf Eh (redox potential) and pH, which revealed spatial, temporal, and genotypic variations in rice. The Eh of the last fully expanded leaf decreased after sunrise and increased with plant age. Leaf Eh was high in the youngest leaf, and its minimum occurred in the last fully expanded leaf. Leaf pH decreased from youngest to oldest leaves. These patterns and dynamics in leaf Eh-pH are in accordance with the patterns and dynamics of disease infections. Leaf Eh-pH is proposed as a novel indicator of plant stress/health. View the paper here.
Previous Issue
Volume 8, September
Next Issue
Volume 8, November
We use cookies on our website to ensure you get the best experience. Read more about our cookies here.
Accept
We have just recently launched a new version of our website. Help us to further improve by taking part in this short 5 minute survey here. here.
Never show this again